Challenged to Upgrade the Lagos Financial Markets to be at par with other International Financial Centres, London, New York, Singapore

FMDQ Securities Exchange, (FMDQ Exchange), on Friday, November 8, 2019, hosted market participants, including its Members, regulators, government agencies, local and foreign portfolio investors and a host of others to the second edition of its flagship FMDQ GOLD Awards (the GOLD Awards). The very well-attended high-class GOLD Awards, which brought together various stakeholders in the FMDQ markets, domestic and international, provide a platform to acknowledge and formally recognise the contributions of participants within the FMDQ markets for the one year period covering October 2018 to September 2019, whose activities have directly impacted the development of the markets and positively contributed to making them “GOLD” – Globally Competitive, Operationally Excellent, Liquid and Diverse.

The highlight of the evening was the presentation of the FMDQ Markets Enabler Award to the Executive Governor of Lagos State, Mr. Babajide Sanwo-Olu, in recognition of his considerable contribution to market development as an ex-financial markets practitioner, and in acknowledgement of the opportunity availed to him, in his current position, to achieve transformational change in the Nigerian financial markets and overall economy. The Award was geared at recognising some of the Governor’s achievements, such as supporting FMDQ’s efforts to secure the admission of the Financial Centre for Sustainability, Lagos (FC4SL) as the 23rd member of the international network of financial centres for sustainability in May 2019 prior to his inauguration as Governor of Lagos State, launching the FC4SL in October 2019 at FMDQ’s Exchange Place with the support of high-ranking government officials, regulators and private sector stakeholders, and signing a Declaration with the leadership of FC4SL committing to advance green and sustainable finance in the Nigerian financial markets, in line with the United Nations 2030 Agenda for Sustainable Development and the Paris Agreement. The Governor was further charged to seize the opportunity availed to him to indeed make Lagos a leading financial centre in Africa by supporting the enactment of key legislations and policies that facilitate affordable housing, clean/renewable energy, zero waste management/circular economy, clean transportation, etc.

During his Special Address, Governor Sanwo-Olu, who was the Special Guest of Honour at the GOLD Awards, recognised and commended the efforts of FMDQ in building a sustainable financial market. He added that FMDQ  has proven to be a reliable partner to Lagos State; even as the State aspires to champion sustainable growth and development for the good of its people and committed to working assiduously toward upgrading the Nigerian financial markets to be at par with globally-recognised financial centres, such as London, New York, Singapore,
amongst others.

The GOLD Awards also featured other key awards categories such as Primary Markets, Secondary Markets and the Members’ & Clients’ Choice Awards. Winning for a second time in a row, Stanbic IBTC Capital Limited bagged the award for the Primary Markets Champion – Capital Markets Securities Origination; and the bank – Stanbic IBTC Bank PLC also emerged the Secondary Markets Champion, winning the FMDQ Dealing Member Award, amongst three others within the Group; Chapel Hill Denham won three Awards, including the FMDQ Registration Member (Listings) and the Debt Capital Markets Financing for Infrastructure Development Awards. The Largest Commercial Paper on FMDQ Award went to Dangote Cement PLC, and other notable awards were the Regulator Market Transformation Initiative Awards won by the Securities and Exchange Commission (SEC) for the empowerment of investors and issuers with choice of depositories by the registration of FMDQ Depository, and the Central Bank of Nigeria (CBN) for financial inclusion by establishing payment services (digital) banks, as voted by FMDQ Members and clients. In order to ensure the full integrity of the award winners selection process, a validation exercise was conducted by Ernst & Young Nigeria, a global leader in assurance services, and a certification issued to validate the integrity of the process. A full list of the GOLD Award winners is available on FMDQ’s website. 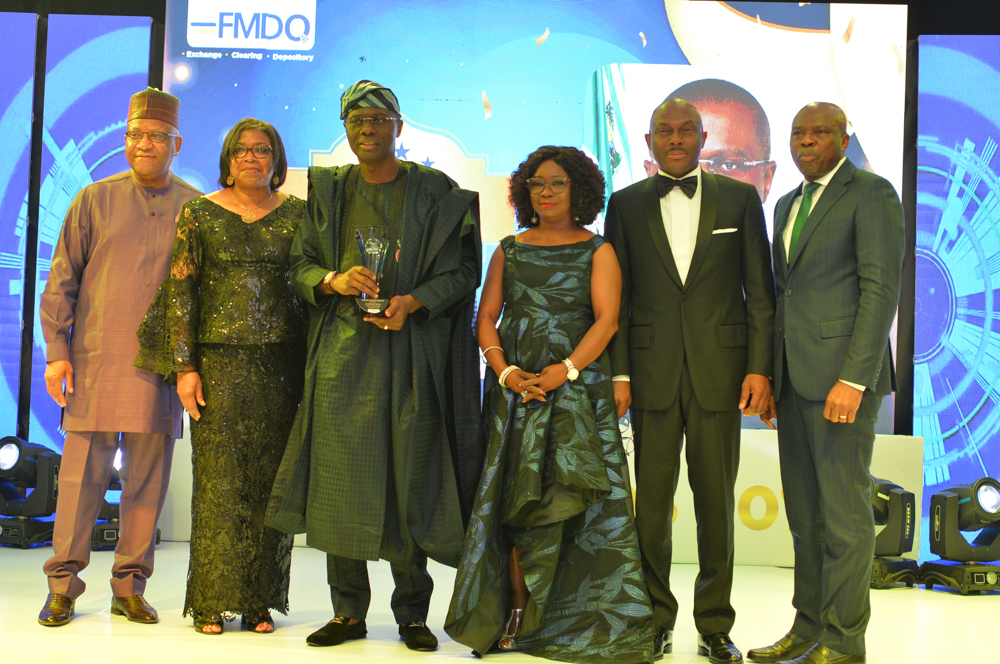 Another key highlight of the Ceremony was the financial markets skit performed by alumni of the 2019 Summer Camp (Primary School Stream) of FMDQ Next Generation Financial Market Empowerment Programm (FMDQNext) – FMDQ’s flagship corporate responsibility programme, a learning and development initiative aimed at providing financial markets education and promoting financial literacy among the youth in Nigeria. Indeed, the audience was thrilled by the far-reaching and thought-provoking knowledge and experiences showcased by the young students, educating the audience on financial market products, services and participants; an evidence of the impact of the FMDQ-Next programme.

The rewarding, yet relaxing GOLD Awards was preceded, on Thursday, November 7, by the 2019 Nigerian Capital Markets Conference, themed, Nigeria: A Compelling Destination of Capital, also organised by FMDQ, playing host to a wide audience of local and international financial markets participants, who turned out in large numbers at the Lagos Oriental Hotel, Victoria Island, Lagos. The Conference, which coincided with the 6th year anniversary of FMDQ, brought together market participants, regulators, government authorities and subject-matter and model markets experts with varying interests in the Nigerian and global financial markets space, to deliberate on near-to medium-term strategies and other pre-requisites needed to position the Nigerian capital and financial markets, to attain its potential and support sustainable economic growth and development in Nigeria.

Welcoming guests to the Conference, Mr. Okwu Joseph Nnanna, Chairman, FMDQ, represented by Mr. Jibril Aku, Vice Chairman, FMDQ, commended all stakeholders for the support given to FMDQ thus far, whilst noting that the Group will continue to provide the essential platform to power growth and foster the strengthening of the broader Nigerian financial market. The Conference was supported by the Federal Government of Nigeria as the Vice President of the Federal Republic of Nigeria, Professor Yemi Osinbajo, SAN, GCON, represented by the Acting Director-General of the SEC, Ms. Mary Uduk, in his Keynote Address, underscored the importance of the capital markets to the achievement of the Nigerian Economic Recovery and Growth Plan. He noted the pivotal role being played by FMDQ in transforming the Nigerian financial market and called for greater commitment from the private sector to complement the government’s efforts especially in the area of infrastructure development.
Furthermore, the Governor of the CBN, Mr. Godwin Emefiele, CON, ably represented by Mr. Emmanuel Ukeje, Special Adviser to the CBN Governor on Financial Markets, also lent his voice to the continued relevance of the capital markets to the much-desired turnaround of the Nigerian economy. The CBN Governor commended FMDQ for setting the pace and championing innovative solutions as part of steps toward aligning the domestic markets to their international counterparts and achieving global competitiveness. 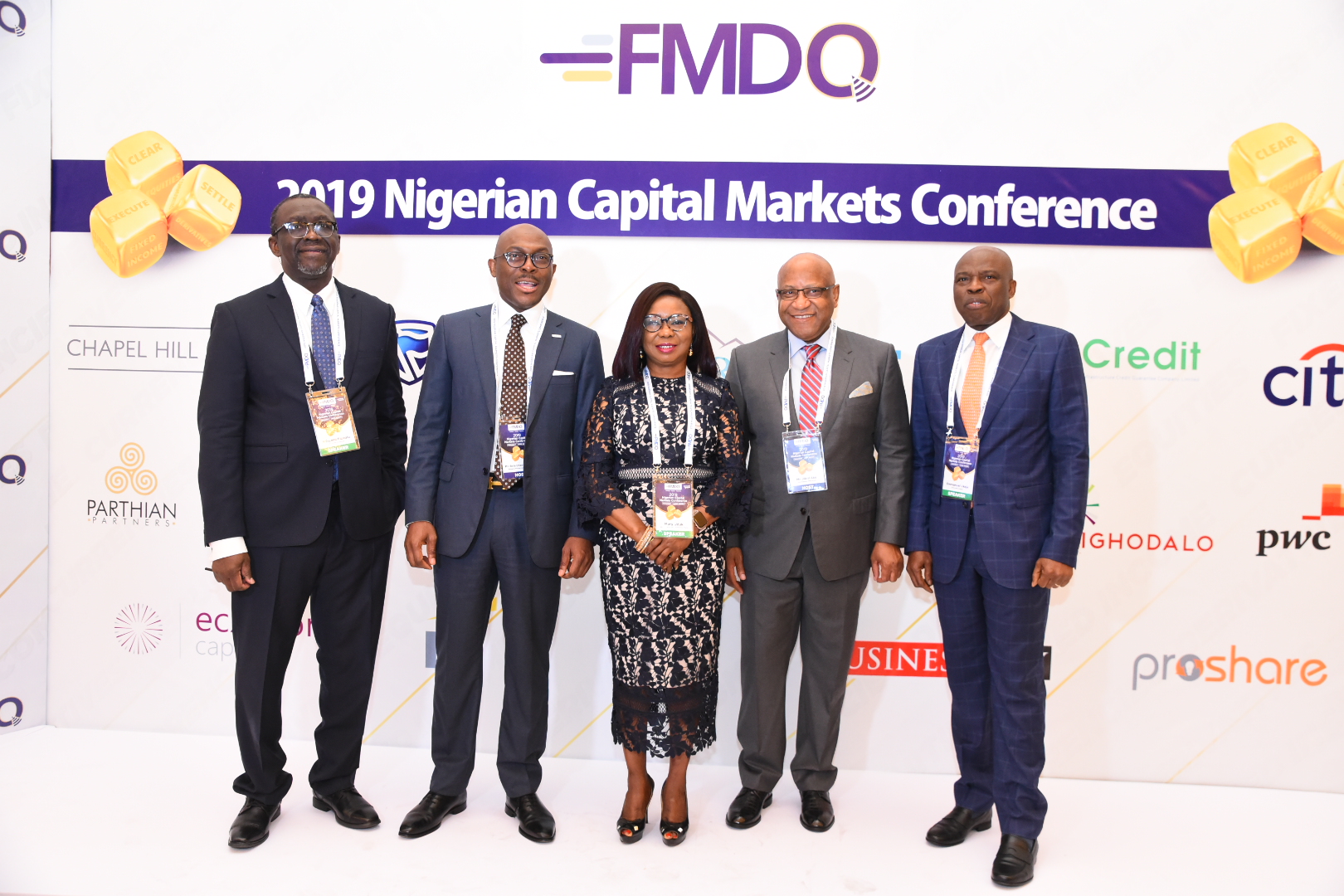 Dr. Adeyemi Dipeolu, Special Adviser to the President on Economic Matters, Office of the Vice President (OVP), speaking on Nigeria as a compelling destination of capital, in line with the Conference theme, highlighted the role of the private sector in leading the growth that Nigeria desires. He further noted the strategic alliance between the OVP and FMDQ; having successfully executed programs including the ease of doing business session for capital market participants, amongst others. From the high-powered presentations and sharing of country experiences to constructive panel sessions drawing from the experiences of model markets and subject-matter experts, the Conference delved into discussions shaping strategies into improving capital inflows, opportunities for operational excellence for Financial Market Infrastructures (FMI), building a thriving derivatives market and other product/market development focus, sustainably financing infrastructure projects, promoting a green path to economic development, amongst others. Further details on the Conference can be found on the Conference website.

FMDQ Group, comprising FMDQ Exchange, FMDQ Clear and FMDQ Depository, is Africa’s first vertically integrated FMI group, providing platforms for the efficient execution, clearing and settlement of transactions. The Group has continued to champion market transforming initiatives in the Nigerian financial market, and with the collective effort and support of all stakeholders, is committed to remain resolute to making the Nigerian financial markets globally competitive, operationally excellent, liquid and diverse.

Stay up to date on our latest news, market data and information

FMDQ, through its activities, aims to achieve sustainability in the areas it actively operates and impacts, as such, its Sustainability Strategy is guided by five (5) main Sustainability Pillars…
Click here